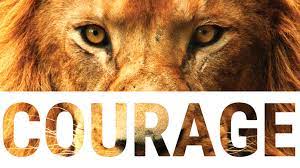 When we think of leaders, we might be tempted to think of Tom Brady or Vince Lombardi and they are great leaders! In today’s society it seems that leadership and courage in many instances are put under intense scrutiny.  In leadership doing the right thing is not always the easiest path.  As leaders maybe one of the most difficult tasks is to hold people accountable without making those around you resent you. It takes an extraordinary investment of time and care in those you lead to be a great leader!

In the book “The DNA of an AD – Athletic Director” New Ankeny Athletic and Activities Director Adam McDonnell describes Courage like this.

“What does it mean to be courageous?  To me it means not being deterred by the challenging and unexpected.  As an AD, we are faced with many obstacles and decisions in which we do what has to be done whether it’s the popular decision or not.  No matter if we are liked or disliked for our decision, we are here to serve kids and we must be courageous with our thoughts and actions to keep kids as our first priority.”  ~ Adam McDonnell, Ankeny High School Athletics & Activities Director

A true courageous leader is the person at the head of the organization, leading the charge and taking the brunt of any societal attacks. That’s what it means to be a leader! Protecting the good work of those you lead.  Not always easy work in lives of coaches and athletic administrators.  But what you do matters! Your work is imperative to the development of those you lead!

In the book “The DNA of an AD – Athletic Director” Aaron Stecker eloquently describes Fearless leadership like this. In essence Courage is the ability to see beyond the fear to lead good works. The courage to take risks that lead to the development of our teams, students, and coaches.

“Fearless is a term I struggle with a bit.  I don’t think anything of merit or of significant impact or influence is ever easy or without risk. For that reason, I think there is always a level of fear to overcome in any endeavor.  For me, it isn’t a matter of being fearless.  Rather it is about being so passionate, engaged and convicted in something that the energy to move forward and pursue is always greater than the reluctance that the possibility of failure can ever generate. Being fearless is about recognizing the fear, engaging with the fear…and then moving forward anyway!” ~ Aaron Stecker, Cedar Rapids Kennedy Athletics Director

Here are two startling statistics that reveal the importance in leading with courage and supporting those we lead:

According to a survey conducted by an International Association of Administrative Professionals, a poor leader is the #1 reason people  quit. The greatest threat to a positive culture is a toxic leader. The debilitating effect of an ineffective leader cannot be quantified as the time spent counseling, appeasing, consoling, reorganizing departments or teams, and the strain on staff with poor leaders produce significant hidden costs for any organization.

“You can not venture the ocean for new horizons until you have the courage to lose sight of the shore.” ~ William Faulkner

Why is courage so important in the work we do as coaches and athletic administrator’s? With less fear and more courage, leaders take on those difficult conversations, better handle change and tackle tough issues as they arise. In short leaders put forth great effort, trust teammates, and will have open and frank discussions. As an athletic leader, your job is to instill courage to those you lead.

Confidence is born out of action and confidence comes from the Courage to take action.

It’s the courage to continue taking action that makes for a great, self-confident leader. The best athletics leaders are inherently confident, and they’re confident because they’ve consistently taken action.

The best leaders are action-takers. When we lead through action, we set a positive example for our team and inspire them to similarly take action. In this way, we avoid one of the worst traits that any leader can possess: hypocrisy.

There are few things that will inspire dissent in your ranks as quickly as being seen to be hypocritical.

Nobody likes being asked to do things because they feel that their leader is simply unwilling or even afraid to do it themselves. When you are in leadership role it comes responsibility. Simply giving the toughest situations to your team and not taking part in them yourself is poor a poor leadership path.

Leading through action also means being decisive. It means being able to quickly make a decision and be willing to commit to that action.

Many lesser leaders make the mistake of deferring or avoiding decision-making. Their fear is that they’ll make the wrong decision and thus lose the respect of their staff.

“Decisiveness is the number one quality of a dynamic leader: their ability to communicate a decision with passion and integrity is an art form.” ~ Farshad Asi

However, being indecisive is worse than making an unwise or incorrect decision. Being indecisive makes you seem weak. And while taking action can result in a negative outcome, delaying a decision will only ever have negative consequences.

How is decisiveness a mark of courage?  Simply, it means that you’re willing to accept the responsibility that comes with the role of being a leader. Being a leader doesn’t mean telling others what to do and it certainly doesn’t mean getting to take all the credit.

Being a responsible leader means that you have the resolve to own up to commitments and promises that you have made. It means being answerable to the actions and decisions you’ve made and by those you lead. It means having both the vision of a leader, and the resourcefulness to execute it. Being an accountable athletic leader is no easy task.  You have the opportunity to have a great impact on all those around you!

“Leaders inspire accountability through their ability to accept responsibility before they place blame.” ~ Courtney Lynch

Being a leader means taking responsibility for the team. It means protecting them, so they can do their best work. It means making decisions and being willing to deal with the consequences. It’s only when we don’t want to look bad that we avoid making decisions… and that is ultimately a mark of cowardice.

In the book “The DNA of an AD – Athletic Director” Bill Fitzgerald explains the lessons he learned from watching his father as a small college athletic director.

“My dad, who was a small college instructor, coach and athletic director always told me: ‘If you make a mistake, admit it as soon as you can, apologize, and make it right immediately.’ He also told me the most important people in the school were the secretaries, cooks, and custodians – treat them like royalty. Those two things I have practiced diligently over my career and it has never been a bad outcome!”  ~ Bill Fitzgerald, Nebraska Athletic Association Executive Director

Finally, being a courageous leader means that you take your lumps when things do go bad. If you make a mistake, it’s important to not only own up to it, but also stay calm and collected when you’re reprimanded by your own superiors, or when the organization risks collapsing.

Likewise, it’s crucial to remain calm in a crisis. That means setting a good example when things seem to be going wrong for the team. Prevent your team from going into a panic. Stay calm and you’ll be able to address the issue in the best possible way.

How to Be the Hero They Need

Where does all this courage and stoicism come from? How can you acquire it if you don’t possess it naturally?

Does it mean trying to act tough? Not at all.

Being a truly great leader comes from having the right priorities. It means forgetting yourself and, instead, focussing on the goals of your organization and the happiness and comfort of your team. When you do that, it’s easy to be a courageous leader.

Remember your why? Hold fast to your purpose…